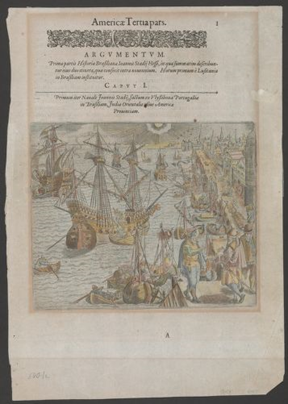 This chorographic image of Lisbon, published as part of America Tertia Pars in the early sixteenth century, diverges from other period images. Rather than depicting the city from a southeastern viewpoint, the illustrator, Theodor de Bry, positions the viewer raised above the harbor of Lisbon with a narrow, eastern viewpoint. Resultantly, the viewer receives a focused glimpse of the Tagus River and the harbor of Lisbon. Merchants and tradesmen, alongside Portuguese caravels ready to sail to Brazil, the WestIndies, and the Americas, occupy the harbor.[1]